A longer and very different post from what my regular readers are used to. I want to talk about my experiences at the Tobermory Hyperbaric Facility and The Meeting Place in Tobermory, Ontario.

As I may have hinted at in some earlier posts from 2019 I have had an ongoing health issue that started late in 2018. I had a sore on my right calf that I couldn’t get to heal and that became infected. As a result, between Christmas and the new year I found myself in the local emergency room being put on intravenous antibiotics.

Six weeks later a succession of doctors and a surgeon had managed to almost double the size of the sore and it was also deeper into the leg. I was beginning to wonder if it would ever heal and was getting very frustrated with the medical treatment I was receiving.

One of the nurses dressing what was by now a wound realised how frustrated I was and arranged for me to see Dr. George Harpur who runs the hyperbaric chamber in Tobermory on the northern tip of the Bruce Peninsula. Dr. Harpur took over my treatment and after a few visits I was ready to go into the hyperbaric chamber.

After 22 sessions (11 days) in the hyperbaric chamber the wound had shrunk from over an inch in diameter to the size of a small pea. I’m still surprised at the speed the wound healed.

Having two sessions in the hyperbaric chamber each day I went over to The Meeting Place between sessions. There’s a lounge area, various rooms and a kitchen where you can use the microwave to warm something up for your lunch. It’s open to anyone and has Wi-Fi. Some of my blog activity over the past couple of weeks has been from there.

A very useful facility with a nice atmosphere. With a wide variety of activities held there I would describe it as a hub for the local community. It’s a popular place and a great concept, other communities in the area could take note.

To the photo and its connection to this post. I first visited Tobermory in the summer of 1985. I took a glass bottomed boat tour out to Flowerpot Island and took this photo from the back of the boat as it was leaving Tobermory. 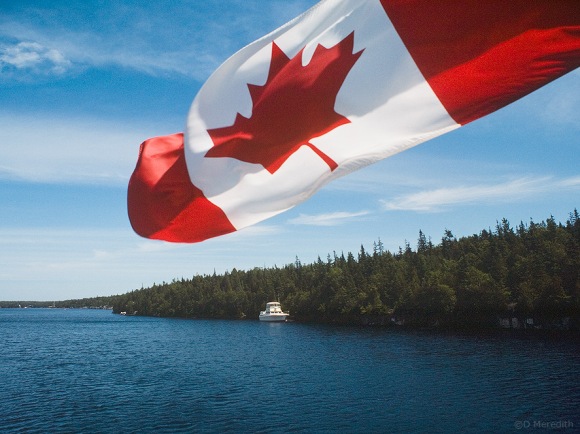 7 replies on “On the tip of the Bruce Peninsula”

Glad to hear you’re doing better. One never quite knows what will work and what won’t when it comes to health.

Thanks for your kind words, David. Dr. Harpur was our family physician for several years before he “retired” to concentrate on the Hyperbaric Chamber. You couldn’t be in better hands, and I’m glad to hear you’re on the mend. As treasurer of The Meeting Place, I’m glad you were able to use the facility so often. Feel free to visit anytime!

[…] went down to the Colpoy’s Bay shoreline for the sunrise this morning. Between an ongoing health issue and limited access to the shoreline due to snow and ice it was the first chance I’ve had to […]

Gosh. I’m glad they were able to help.