Another afternoon walk after physiotherapy in the morning and another opportunity to test an old film camera lens adapted to fit a mirrorless digital camera.

This time it was a Vivitar 35mm f/1.9 lens I purchased used in the 1970s. The lens has had a hard life, in the late 1980s it spend several springs attached to the back of various nestboxes while I documented the nesting cycles of various bird species. As a result it feels as if it could fall apart each time I use it.

A Bracken frond with the lens wide open at f/1.9. The out of focus dirt and rocks under the frond have an interesting rendering with the wide open lens.

Orange Lichen and green moss on a boulder with the lens wide open again I think. I tried to keep the aperture wide open as much as possible on the walk but as it’s an adapted lens there’s no communication with the camera so no lens settings are recorded. 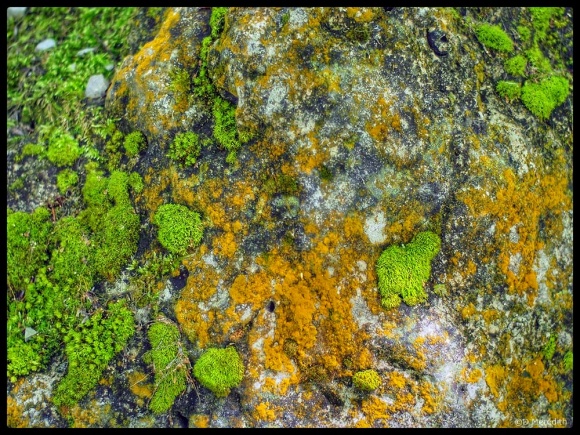 The textures on the mossy / licheny boulder are fascinating and interesting too that effect you’re getting with the background on the fern.

Thanks Susan. The Hosta leaves, fern and boulder are regular test subjects for the various adapted lenses.