This is my contribution to the Tuesday Photo Challenge – Number and in this case the number is 59 during the first weekend of April 1982.

That was the race number for Team Bike in their first World Endurance Championship race, a 24 hour motorcycle race at the historic Le Mans race track in France.

Number 59 makes a pit stop in the middle of the night. The bike is refueled and the oil level in the motor is checked while the riders discuss something and a French official uses a torch to watch the pit crew.

Number 59 enters the start/finish straight at around midnight. 9 hours into the race, 15 to go. 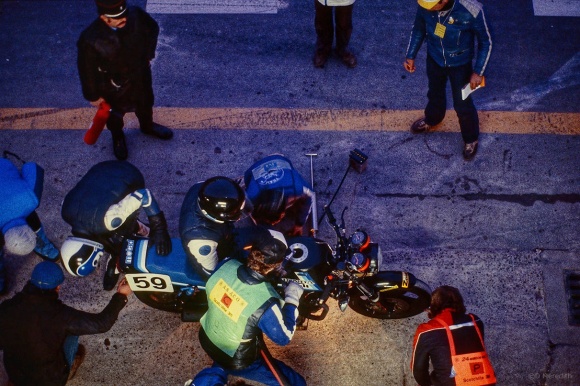 Number 59 makes a dawn pit stop. Tyres are being checked to decide if either will need to be changed on the next pit stop while being watched by multiple French officials.

[…] enables us to follow the progress of number 59 in wonderful photos in his post in David M’s Photoblog; 24 hours at Le Mans must be an epic […]

Love the bike action David 🙂 Did you know the team or riders?

Thanks. I had a hand in building the bike, knew both riders and some of the pit crew and was there to document the team. One of their sponsors was a British motorcycle magazine.

How did they do? I used to help organise and work at the track for the Castrol 6 Hour Race. 24 hours is one hell of an endurance race

If I recall correctly they were 12 overall, 1st in class and won the awards for the best newcomers and the team to make the most effort to finish the race. They were up to 8th or 9th before Howard locked up the back wheel under braking and stalled the motor. He couldn’t get it to restart and pushed the bike back to the pits.

Yes, I don’t know if anyone was expecting to do so well.