This is my contribution to the Friendly Friday Photo Challenge: Surprise.

Something different from me for a surprise, a post about being surprised by some of the photos I have discovered while digitising my film archives.

I don’t know why I took them unless it was simply a record of the conditions. So a thought a selection of the photos would be a surprising contribution to the challenge.

My Tenba P595 in the snow in Hatherton, Cheshire in the early 1980s. Tenba bags were newly imported into the U.K. back then. 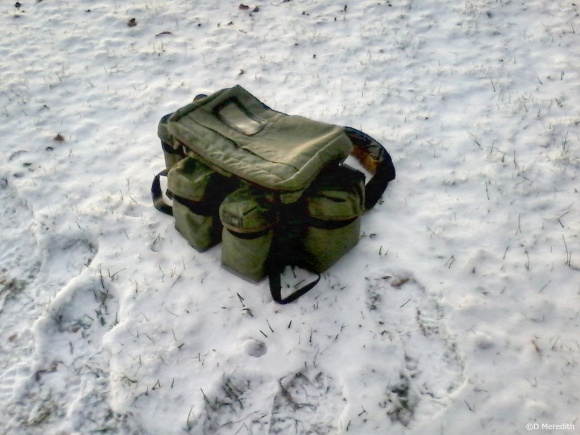 My Tenba P895 in the snow on the Colpoy’s Bay shoreline at sunrise. By the time the photo was taken this bag was around 30 years old.

My Domke F-6 sitting in the snow on the South Bruce Peninsula. A smaller bag I got for my DSLR and kit of manual focus prime lenses.

My Domke F-2 sitting in the snow on the Colpoy’s Bay shoreline. My bag for a DSLR and fast zoom lenses.

Now there is a surprise. I wonder if you were testing your camera settings? Nevertheless they tell a story – of your day and are surprising. Thanks for joining in with Friendly Friday! I never mind a good snowy photo or two or three.

Maybe, exposure of snow can be tricky. It’s certainly never been a photo request from an editor, I’d remember that. Plus the photos span around 35 years.

35 years. I suppose if you were testing the setting each time ypu took the vameta bag photo, you would remember.

It’s probably going to remain a mystery. There was a couple more that I skipped because I thought 4 was enough.

Made me laugh! Maybe you were worried if it snowed more they would disappear so this was a reminder of where they were!!

Maybe. I have a couple of photos of a camera bag sitting on a rock where it was so dark at the time I didn’t know it was in the shot but the snow photos all appear to be deliberate.

Intriguing . . . . if only you could go back in time to ask yourself!

It will come to you in the middle of the night next year!