This is my contribution to the One Word Sunday challenge Flare or Flair.

Having shot a few photos of sun shining through trees with deliberate flare on some of my recent walks around the neighborhood I then decided to go in a completely different direction. So here’s a visit to the Le Mans race circuit in France for the 24 hour motorcycle endurance race in the spring of 1982.

The flare in this photo is created by the lights illuminating the pit lane entrance and the start/finish straight at the race circuit. The photo was taken with the silvernose OM Zuiko 50mm that I got with my Olympus OM1 in 1976. Those lenses were single coated rather than multi coated which probably explains the flare.

The flair in this photo is the motorcycle and rider. Built on a shoestring budget in a garage in London this is the bikes first race. It looks like a standard Honda CB900 rather than a purpose built endurance racer. Despite all that the team was up to 8th in the race at one point, ahead of some of the big budget professional teams. 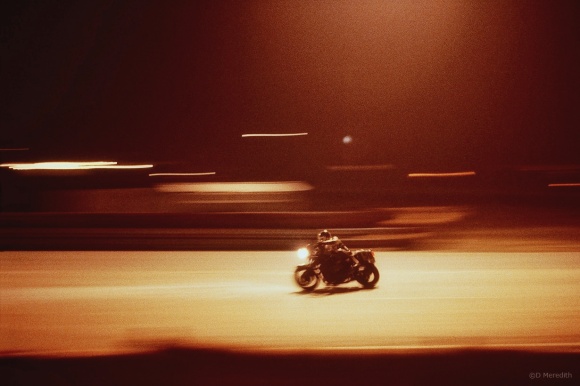 Thanks Debbie. I was glad I changed my plans for the prompt after seeing your post this morning.

That’s a cool choice, David. I didn’t go with the sunshine flare either for much the same reason/s.

Yes, I thought sunshine and trees was a little obvious so despite shooting a few recently.

[…] week. Special thanks go to Sandy for great flair in her words and image; Elke for a fun flare; and David for an image where the flare is a big part of the story that his image […]