This is my contribution to the Weekly Prompts Wednesday Challenge: Downsizing.

On reading the prompt one thing came to mind immediately so I decided to go with that rather than the topic discussed in the prompt.

The thought that came to mind was my downsizing of the camera equipment I carry for my personal work. I started downsizing about three years ago, I was looking to get back to basics and shoot the way I used to in the 1970s and early 1980s. A small bag with a handful of manual focus prime lenses.

Then an accident 16 months ago left me with restricted movement in the right shoulder and a weaker right arm. Another reason to further downsize. 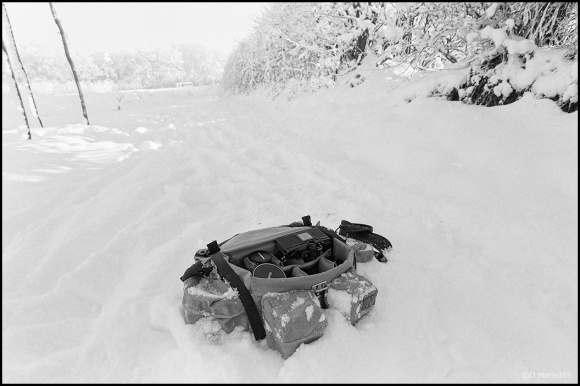 My original small kit in the very early 1980s, a Tenba P595 in the snow. The P595 was the smallest bag in the range. A decade later I had two larger bags in the range and the P595 was stuck in the bottom of a wardrobe.

What I wanted to downsize from a few years ago, my Domke F-2 containing a DSLR and three weather sealed fast zooms. This is already downsized from what I used to carry in the film era. In the 1990s and early 2000s I carried my film equipment in a backpack.

My current downsized bag, a Domke F-10 JD containing a small, mirrorless camera and three manual focus prime lenses. I can’t explain why all the photos were taken in the snow.

Lol! I had definitely noticed that all the photos had been taken in the snow. My guess is that it really shows the bag and the equipment. If you had taken the shots in the spring, the bag and the gear would have been lost in the noise.

True. It’s probably as good an explanation as any.

The bags show up well in the snow. Great one’s to show for downsizing.
I also went against GC’s initial theme with my Nan’s farm response and for that matter so did he on his blog! 😂
Thank you for taking part again.

Thanks Sue. For some reason this ended up in the spam folder. My some miracle I spotted it as I don’t normally glance at the contents, just mass delete everything.

I am the same, I routinely delete the content of the spam each morning and never look beyond the first page!