This is my contribution to the Friendly Friday Photo Challenge: Re-imagine Orange.

I thought about some of the various species of flora and fauna with Orange in their common English names. That’s when I discovered that orange wasn’t very common in species English names and that one of the photos in my archives with orange in the name was incorrect. What I had captioned Orange Marigold is more correctly known as Pot Marigold.

Center of a Pot Marigold after rain. Photographed in Hatherton, Cheshire, England and captioned Orange Marigold by me.

A male Orange Tip Butterfly feeding on Bluebells in a garden in Faddiley, Cheshire, England. 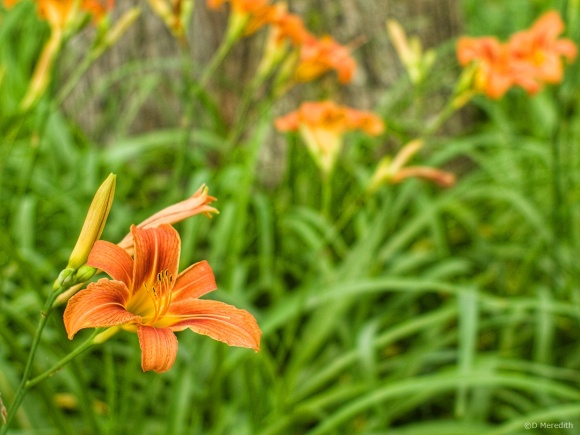 Orange Day-lilies photographed on the South Bruce Peninsula, Ontario, Canada. I wouldn’t be surprised if these aren’t classified as an invasive species in the future. Originally an Asian species I have seen them growing in various wild locations in Ontario.

This is my contribution to the Lens-Artists Photo Challenge: Favourite Photos of 2019.

I considered a few themes for the challenge but in the end decided to just go with a selection of my favourites for the year.

A January thaw saw this Ivy appear as the snow melted.

Early June and a male Purple Finch in the yard.

Mid July and an Orange Day-Lily photographed with a 25mm CCTV lens adapted to fit a mirrorless camera.

Early September saw me down on the Colpoy’s Bay shoreline 45 minutes before sunrise so I could do some long exposures. This is a 60 second exposure to allow the clouds to move across the sky.

The end of October saw the autumn colour mostly coming to the end while a few trees held on to their leaves.

Mid November saw me down on the Colpoy’s Bay shoreline at sunrise where breaking waves had splashed over a bush to form this ice sculpture.

This is my contribution to the A Photo a Week Challenge: Stylish.

After a couple of false starts to the challenge I thought about my testing of various lenses adapted to fit a small mirrorless interchangeable lens camera this summer.

With the growing popularity of mirrorless cameras it has become stylish to adapt a wide variety of lenses to these cameras.

Although I was testing the adapted lenses partly because I was putting together a compact, lightweight camera kit after an accident left me with restricted movement in the right shoulder and a weaker right arm.

An Orange Day-Lily taken with a 25mm CCTV lens.

Dandelion clocks taken with a 50mm OM Zuiko lens from 1976.

A Bracken frond taken with a 35mm CCTV lens.

This is my contribution to Cee’s Fun Foto Challenge: Gardens.

A selection of nature subjects taken in a variety of gardens over the years.

A Redwing eating a Holly berry photographed in a Cheshire, England garden in the mid 1980s.

Orange Day-Lily photographed in an Ontario, Canada garden a couple of years ago. 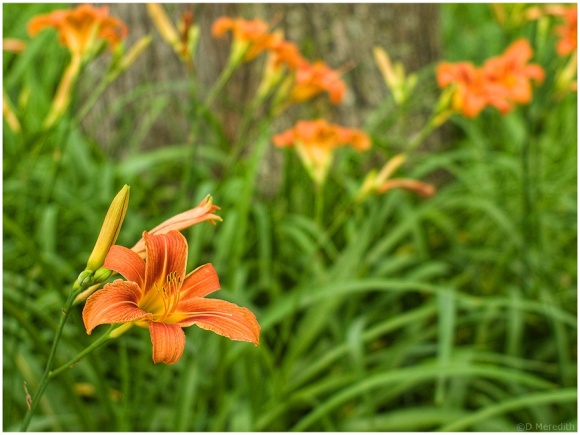 An Eastern Chipmunk photographed in a garden in Ontario, Canada a decade or so ago.

A leucistic juvenile Great Spotted Woodpecker photographed in a Cheshire, England garden in the late 1980s.

A Coneflower photographed in an Ontario, Canada garden a year or two ago. 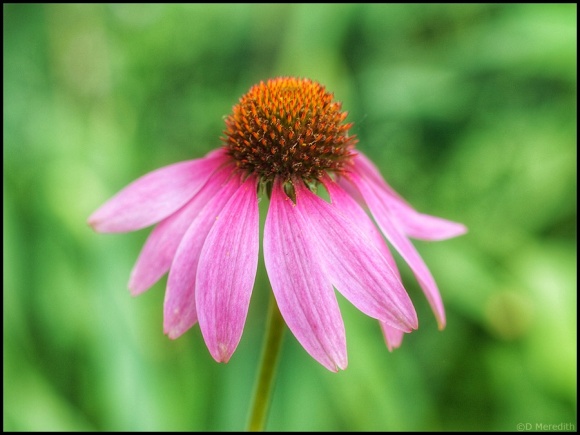 This is my contribution to the Weekly Prompts Photo Challenge: Bloom.

I had a few ideas for this challenge. Recently I have been photographing a selection of blooms as part of my testing various lenses adapted to a mirrorless camera. Just recently the Orange Day-Lilies started blooming so they were added to the subjects used for testing the adapted lenses.

I then realised that it wasn’t the first time that I had photographed the Day-Lilies with adapted lenses.

Taken a couple of years ago with a 35mm Vivitar lens from the 1970s adapted to fit a DSLR.

Taken recently with the 7Artisans 35mm f/1.2 lens on a mirrorless camera.

Taken with a 35mm Vivitar lens from the 1970s adapted to fit a DSLR two years ago.

An extension of the adapted lens idea.

There’s a selection of manual focus prime lenses now being manufactured in a variety of camera mounts by some little known makers. They don’t have to be adapted to fit the camera but they’re not as optically corrected as modern lenses from the major manufacturers. I regard them as a variation on an adapted lens giving some interesting effects.

One of those manufacturers is 7artisans who build around half a dozen small manual focus primes in a few different camera mounts. This photo was taken with their 35mm f/1.2 lens on a very brief walk last weekend.

It’s my only outing with the lens so far so I haven’t really formed an opinion on it other than that with a fairly large front element close to the front of the lens it will probably benefit from a lens hood. Not something that I have bothered about with the adapted CCTV lenses I have been experimenting with.

An Orange Day-Lily photographed with the lens wide open at f/1.2 which produces an interesting, soft, out of focus rendering of the foliage in the background.

This is my contribution to the Lens-Artists Photo Challenge: Dreamy.

I had a few ideas for the challenge before thinking of some of my recent walks testing various lenses adapted to a mirrorless camera. One lens in particular produces images with swirly backgrounds and vignetting in the corners giving some photos a dreamlike quality.

The lens in question is a 25mm f/1.4 CCTV lens. I picked a shot of an Orange Day-Lily taken with the lens on my most recent test and edited the shot in a variety of ways using Snapseed.

A mildly edited version with increased saturation and the vignetting in the corners darkened a little.

A low key version with a heavy vignette and a grungy look.