Egg laying again but insects rather then birds this time. A female Banded Demoiselle egg laying watched by a male in the background. One from the archives taken in Cheshire, England in the mid 1990s.

In a strange way a follow-up to my Saskatchewan’s Provincial Flower post. You may wonder what the connection is between Damselflies and a Prairie Lily, it’s the lens used. I didn’t use a macro/close up lens for this shot, I used my long telephoto normally used for birds and wildlife. The reason being is that the Damselflies are in the middle of the water inlet of a reservoir a couple of metres from the bank. I set the tripod as low as it would go, mounted the telephoto and then started trying different combinations of teleconverters and extension tubes until I found a mix that gave me the magnification needed.

The Prairie Lily is found over a quite large section of North America and isn’t limited to prairie habitat. Interestingly, as the Provincial Flower of Saskatchewan it cannot be picked, uprooted or destroyed in any manner in the province.

I found a group of three or four growing in a ditch on a quiet back road. Rather than walk up to the flower with a close up lens I set up my long telephoto on a tripod. That helped isolate the flower from cluttered surroundings and avoided trampling other plants in the ditch.

Having been posting photos of birds in Ontario recently I thought it was time I posted something from Saskatchewan.

Now that summer has arrived here’s a photo of a Willet in breeding plumage wandering around a marsh looking for something to eat. Taken from a vehicle window using a bean bag to rest the lens on.

I do know what species of Wren this is but as it’s Throwback Thursday it gives me an opportunity to illustrate a problem captioning certain photos.

The photo was taken in Cheshire, England in the 1980s. In those days most British field guides gave the common English name as Wren. A few would call it a Winter Wren as it was classified as the same species as the North American Winter Wren.

However, over the past couple of decades scientists have been DNA testing lots of species which has resulted in quite a few being reclassified. What was a Wren or Winter Wren in Britain is now a separate species, the Eurasian Wren. The North American Winter Wren has been split into two species. It’s still the Winter Wren in central and eastern North America but the birds down the west coast are now called the Pacific Wren.

To make matters even more complicated the splitting of the various species means new scientific names for some. As my standard photo caption includes both the common English name and the scientific name it means that quite a high percentage of the birds I have on film now have inaccurate captions written on the slide mounts.

So to the photo. It shows an adult Eurasian Wren emerging from a nestbox. An unusual nest site for the species which normally prefers to build a nest hidden in vegetation.

A couple of Black Terns twisting and turning as they search for something to eat in a marsh. A bird would spot something in the marsh and twist around in flight.

I was taking a little used back road as an alternative route to visit friends in Saskatchewan when I came across a small colony of Black Terns on a marshy slough. Needless to say, I was late getting to the friends place although they knew I was going to be delayed having seen me on the back road when I was photographing the Terns. 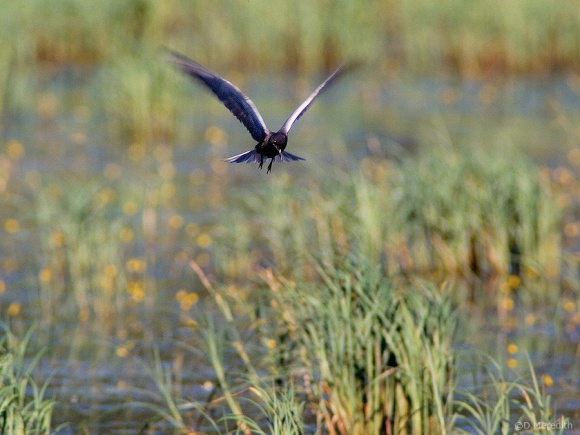 Taken at Big Bay, Ontario. I was photographing a Cedar Waxwing when I heard a noise and discovered the snake slowly swallowing the frog. One of the photos was a runner-up in a photo contest about the preservation of nature which I found a little ironic.

An American White Pelican surrounded by bubbles. The Pelican is one of  a group fishing in a channel where a marsh drains into a section of Last Mountain Lake, Saskatchewan. There is a sluice gate to regulate the water level in the marsh which is causing the bubbles in the water.

The horn on the Pelicans bill shows it is a breeding adult.